The implicit whiteness of Skyrim

Here are a couple of cool alignment charts on r/Skyrim:

Think I jest? Someone made a lore-based alignment chart for the Elder Scrolls series, got ratioed, and the top response was literally "That's racist".

Cat people, lizardmen, just a question a skin tone really. We're all vertebrates. Sorry, no offense to the cuttlefish. What I'm trying to say is that we are all fundamentally assholes. So if someone calls you racist, just smile and call him an asshole! That is how he identifies, and good for him. Self-knowledge is the beginning of wisdom.

Surprised that I couldn't find the Skyrim racial alignment chart, I searched for something similar like DnD instead. I Googled… then DuckDuckGo'd… then Dogpiled. Closest I got was a Warcraft races chart, which I never played. Nothing for classic DnD races! In fact, six months ago Wizards of the Coast got rid of racial alignment entirely because dat's rayciss.

I did find one Skyrim racial alignment article at GameRant. However the manlet author Ben Baker couldn't even pick a single category per race. Gamers owe Ben a great debt for his momentous discovery that an individual may differ from the racial average.

Ben then categorizes Nords as not-Good, which is blatant anti-white racism. Nords are obviously Good people, living in their own homeland, being kind to neighbors and kin, making picturesque villages like Riverwood, mildly discriminating against cannibal Bosmer sex tourists. There is no other race in the game that behaves more altruistically.

Perversely, Ben places half of Orcs in the Good category. What are they doing, manufacturing weapons for charity? Pro-bono beatings? Obviously Ben has lobotomized himself in the name of political correctness. Orcs good, Nords bad, because kikes say so!

Ben is the sort of snooty fellow who would move to Whiterun for the "good schools" and then insist on importing a bunch of Orcs "to improve the boring lack of diversity". Well Ben, let's skip the middleman: We'll ship you straight to Haiti! 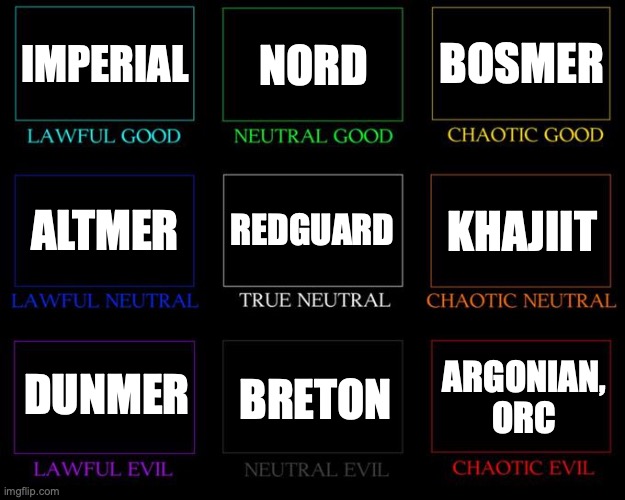 Obviously the contrast between Imperial order and Nordic rebellion is central to Skyrim, as expressed through the Civil War plotline. Both races are devout worshippers of the 8.5ish divines. We define Aedra as good and Daedra as bad, roughly speaking. (inb4 Meridia)

The chaotic dimension measures criminality versus civilization. Elves tend to be more civilized, while bestial races are lawless. Bosmer are bestial elves, the exception.

Khajiit may be career caravan drug dealers moonlighting as assassins, but they are ultimately in it for themselves, and not prone to any greater evil than lycanthropy. They do not wish their trade permits revoked, and hunt down their own troublemakers, as do the more civilized Redguards.

Dunmer are evil due to their penchant for vampirism; Bretons for their attraction to Daedra and necromancy.

The Daedra Malacath is the only god who can somewhat keep the Orcs in line. The Imperial legions liberally apply floggings and executions, then dump the surviving veterans in Skyrim. There the Orcs amuse themselves with banditry and less-organized forms of violence — further straining relations between Nords and Empire.

Occasionally a local Thief's Guild or tavern employs an Orc enforcer, with payment primarily in alcohol. This is always hard on the furniture and whores, and often results in a lethal leadership challenge. Thus enforcers are kept drunk and unarmed. When his bounty reaches a certain level, he is politely offered a (possibly nonexistent) job for a sizable raise in another city.

Older orcesses can calm down enough to work as city blacksmiths, since Orcs do not suffer a female forgemaster.

Note that I judged these alignments primarily by game mechanics, not lore. I doubt it is possible to make a definitive lore-based alignment chart, and would like to see critics do so before arguing that my chart contradicts lore.

libtards> "Diversity is paramount because all races are the same!"

Any racial alignment is a big no-no for the left, the idea that different cultures combine with biology would be very different in terms of morals and societal structure is impossible for them to accept.

Everyone is exactly the same but diversity is both skin deep and the most important thing about a person.

Why aren't Orcs feminists? And other mysteries expounded.

Note that I judged these alignments primarily by game mechanics, not lore.

So why do you say Khajiit are slightly mischevious self-interested traders who just want to get by while Argonians are stealing babies to feed them to vampires? Why (even though they have virtually the same starting skills) do you put Nords at Neutral Good without comment while you spend several paragraphs classifying Orcs as mentally retarted, sexist chaotic evil drunkards? And that's without even getting into things like you claiming Dunmer have a penchant for vampirism, and your blanket statement that Elves are more civilized and the Beast Races are lawless. All of those things are - on a mechanical level - profoundly absurd.

Sure, it's a single player game so classify the races and play them however you like in your own playthroughs. But taking your own biases and then claiming that "oh, gameplay mechanics support this!" when it doesn't is just bad form.

Finally, someone mounts a substantive challenge.

Khajiit and Argonians are both obviously Thief races in Requiem. From there, one observes the sociological conditions of the characters in-game: location, quests, wealth, etc. This is what I mean by "game mechanics": info useful for gameplay, not irrelevant book lore. From that, I infer what is really going on.

Khajiit are wealthy caravaneers dealing drugs and death under the table. The caravan masters won't risk getting banned.

Argonians are impoverished, resentful, exploited, excluded dockworkers. Their ghetto in Windhelm is adjacent to Volikhar island. Obviously the vampires would recruit thralls from this convenient amphibious population. Argonians have little to live for and nothing to lose. They are poorly organized and thus susceptible to vampiric infiltration. Mostly the Argonians steal from each other, because they are residentially isolated from the Nords. However, some of them are willing to literally betray humanity for a crust of bread.

Nords and Orcs are similar in that they are both heavy warriors. However, their ethos drastically differs. Orcs follow Daedra Malacath's way of strength, berserker raging to hit extremely hard. Nords follow the way of Aedras Talos and Akatosh, reviving their ancestral art of dragon shouts. Eventually the Orc wields the Ebony Blade and Ebony Mail of evil Daedras Boethiah and Mephala.

Thus there is a vast difference between the chaotic evil Orc black knight and the neutral good Nord white knight. (The Imperial is the lawful good paladin.)

I see that you are lobotomized by political correctness. Otherwise you would understand that a Orcish culture based on strength does not permit chiefs to grow old or allow women, who have drastically less upper body strength, to hold coveted male positions of authority.

Argonians are quite primitive and possibly oviparous, thus making excellent candidates for a matriarchy. Lack of paternal investment would explain their destitute state.

Anyway, I have sufficiently demolished your objection.